To share your memory on the wall of Shirley Williamson, sign in using one of the following options:

Print
Shirley Williamson, born September 2, 1927, in Montreal, Quebec, died peacefully May 14, 2021, at Bluewater Health in Sarnia, Ontario at the age of 93.

Predeceased by her husband Leslie Williamson of Sarnia, Ontario, and survived by thei... Read More
Shirley Williamson, born September 2, 1927, in Montreal, Quebec, died peacefully May 14, 2021, at Bluewater Health in Sarnia, Ontario at the age of 93.

Shirley was a devoted daughter, a loving sister, a caring Mother, a happy grandmother and great-grandmother, and a loyal friend to many.

She was born and raised in Montreal, Quebec along with four siblings, and enjoyed a connection to a larger extended family that had emigrated to Canada from England in 1906.
Among her favourite activities growing up were; swimming, skiing, biking (when allowed), cottaging, music (swing), and dancing. From a young age, she learned to knit and continued to enjoy this activity into her eighties.

Some of her favourite memories, as a late teen and younger adult, were of ski trips to Morin Heights, Quebec on the weekends with family and friends, and staying at the Campbell Farm.
Throughout her twenties, before her marriage in 1957, Shirley had several employers, but she always spoke highly about her position with the Hudson Bay Company in the Fur Department – a great job and employer she fondly recalled.

A devoted and busy Mom with her four children, Shirley provided them with a loving and happy home – when the children were in high school she worked in the family business in Sarnia. Later in her working life, she enjoyed working for her niece’s family business in Ajax Ontario.

Shirley very much enjoyed traveling – most of which occurred in her retirement years. She especially loved her trips to the UK, New Orleans, and North Carolina with her sister Norma and friends.
She had a great love for children and was a happy and positive influence on her grandchildren, and great-grand-children in both Sarnia and Kitchener. She also was a nanny to her niece Gail’s young children (Kym & Kristen) for several years in Pickering Ontario.

Shirley was very sociable and she made, and kept, many friends over the years from Montreal, Sarnia, Pickering, and Kitchener.

Finally, there are two other things my Mom enjoyed greatly – hockey and coffee. Her love of hockey began as a teenager going to the Montreal Junior Canadiens games – at that time this team provided the talent for the NHL club (she saw the young stars). Shirley’s drink of choice was definitely coffee – she enjoyed a “cup of joe” anywhere and anytime – a double-double please.

Shirley will be missed by those lives she has touched – rest in peace.

We encourage you to share your most beloved memories of Shirley here, so that the family and other loved ones can always see it. You can upload cherished photographs, or share your favorite stories, and can even comment on those shared by others.

Posted May 22, 2021 at 11:06am
To the entire Williamson Family,
We are very sorry to hear of your Mom's passing. She was a great lady.
Larry and Dawn Johnson
Comment Share
Share via: 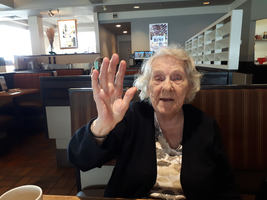 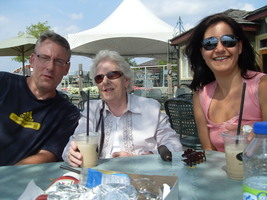 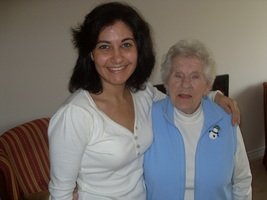