To share your memory on the wall of Christopher Wallis, sign in using one of the following options:

Chris’ achievements are impressive, starting with his work ‘Yellow Sun and Red Sky’ which was exhibited at Expo 67 and the Museum of Civilization. In 1969 Chris was invited to co-create the Environmental Arts Program at Fanshawe College where he taught until 1979. He left to focus more on his studio practices. In 1989 Chris created 10 heraldic windows known as the ‘Inns of Court’ windows at Osgoode Hall and in 1992, two of his windows were unveiled at Rideau Hall in Ottawa by Queen Elizabeth II. In 1993 Chris received the 125th Anniversary of the Confederation of Canada medal for significant contribution to Canada, and in 1996 was awarded The Bell Canada Award for excellence in heraldic stained glass. In 2003, Canada Post featured Chris’ windows from St. Stephen’s Ukrainian Catholic Church in Calgary, and from St. John’s United Church in Arva on an international stamp series. His work has been photographed by the famous Yousef Karsh.

Chris was a Fellow of both The British Society of Master Glass Painters and The Royal Heraldry Society of Canada, and a Member of the Royal Canadian Academy of Arts.

Chris was predeceased in 2019 by Geri, his wife and loving companion of nearly 40 years, and by his first wife Clarice in 2018, whom forever held him dear. He leaves behind his son Simon, daughters Sarah and Elizabeth and his grandchildren.

A very warm thank you to Chris’ caregivers at The Country Manor Retirement Home in Thedford. Cremation has taken place and a private family gathering will be held in the near future. Charitable donations in Chris’ memory to any Art for Youth initiatives are welcome.

We encourage you to share your most beloved memories of Christopher here, so that the family and other loved ones can always see it. You can upload cherished photographs, or share your favorite stories, and can even comment on those shared by others.

Posted Mar 30, 2021 at 11:42am
Our sympathies to Chris' family. . We got to know both Chris and Geri through their art projects in Petrolia and Oil Springs, delighting in their gentle company and their creativity. In Petrolia, Chris created 13 windows over 26 years at Christ Church Anglican, making it perhaps the only church with stained glass made exclusively by Chris. Most remarkable is his Memorial window at the church, 25 feet high and incorporating the entire oil history of the town. We commissioned him to create two windows at Petrolia’s Victoria Hall and he created three remarkable solar-powered stained glass panels at the now closed VanTuyl and Fairbank Hardware. In Victoria, B.C. we have been amazed at his enormous windows at the Governor General’s house with the forestry history and his huge windows at Christ Churches in Victoria and Ottawa. With 800 windows across Canada, many new his work but few knew his name. Watching him create windows with such simple tools was amazing. Forever humble and a delight to talk to, he’s a gentleman who will be much missed.
- Patricia McGee & Charlie Fairbank of Oil Springs

Posted Mar 28, 2021 at 09:27pm
Passing on sincere condolences to Christopher's family. Christopher was a great customer of my father, Edwin who passed away in 2020 at age 93 and I ( Elston's Hyde Park Hardware early 70's to 1987) when we had our hardware store in Hyde Park where Christopher came and shopped for his studio needs. Christopher was always a kind gentleman and would share his work with us when he was working on his artistry projects. Thinking of you at this difficult time. John Elston
Comment Share
Share via:
PL

Posted Mar 28, 2021 at 01:28pm
My sincere condolences to the family. Chris was a very kind and true Gentleman!. His talent in his art was unsurpassed..and the world has lost an amazing man !
Comment Share
Share via: 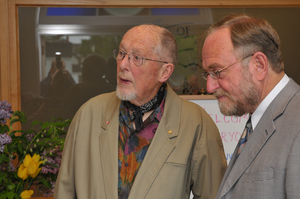