To share your memory on the wall of Emerson, John \"Jack\", sign in using one of the following options:

Provide comfort for the family by sending flowers or planting a tree in memory of Emerson, John "Jack"

Provide comfort for the family by sending flowers or planting a tree in memory of Emerson, John "Jack"

Print
John "Jack" Emerson formerly of Strathroy and Thedford died on Monday, January 18, 2021, at the age of 69.

Jack is predeceased by his common-law spouse of 30 years, Trudy Sherwood (Keck), and was the loving stepfather of Kathleen (Greg)... Read More
John "Jack" Emerson formerly of Strathroy and Thedford died on Monday, January 18, 2021, at the age of 69.

Jack is predeceased by his common-law spouse of 30 years, Trudy Sherwood (Keck), and was the loving stepfather of Kathleen (Greg) Brophey, Jenifer Deeley (John McIntyre), Jillian Deeley, Trish Deeley, and Cristal (Phillip) Smith. Jack was proud to see his family grow with the addition of 14 grandchildren and 4 great-grandchildren.

Jack was raised in a large family and will be lovingly missed by his siblings, Norma Arnel, Linda (Mel) Nutt, Pat Emerson, and Liz Emerson. Predeceased by his parents David and Ivadel Emerson, as well as his brothers Chris and Allan Emerson and brother-in-law Ernie Arnel. Jack will be missed by his many nieces and nephews.

Jack took great pride in his children, grandchildren, and great-grandchildren. A man who loved to work in his garden, Jack could be found relaxing at the picnic table drinking a cold beer after working on his thriving vegetable garden. A Labbat's Blue, the Blue Jays, and his other favourite blue, the Toronto Maple Leaf's were Jack's way to spend time after a hard day's work. With over 20 years as an employee with Cuddy Farms, Jack took on a variety of jobs given to him at the company. Regarded as a good working colleague and a thoughtful friend.

Everyone who encountered Jack knew he was one of a kind, especially when he busted out that famous laugh. Dubbed Cacklin' Jack, his laugh was so catching you couldn't tell if you were laughing because of what he said or at his laugh.

Jack's family would like to thank Dr. Whynot and the staff at the Country Terrace Nursing Home for taking care of him: "You went above and beyond to make him at home and comfortable, and you became more like friends to him. Thank you for that." Family and friends continue to remember Jack for his sense of humour, good nature, and humility. A public memorial will not take place at this time, inurnment will take place at a later date at the Arkona Cemetery followed by a celebration of Jack's life.

Donations are appreciated to the Heart and Stroke Foundation. Arrangements are entrusted to Gilpin Funeral Chapel, 123 King Street East in Forest 519-786-4964. Please leave a memory or condolence online at www.GilpinFuneralChapel.com
Read Less

Print
Family and friends continue to remember Jack for his sense of humour, good nature, and humility. A public memorial will not take place at this time, inurnment will take place at a later date at the Arkona Cemetery followed by a celebration of Jack's life.

Donations are being accepted for: HEART AND STROKE FOUNDATION OF ONTARIO.

We encourage you to share your most beloved memories of Emerson, John "Jack" here, so that the family and other loved ones can always see it. You can upload cherished photographs, or share your favorite stories, and can even comment on those shared by others.

Posted Feb 02, 2021 at 04:40pm
Liz Zavitz well Jack it with deepest sadness that I write this message two weeks ago yesterday I found out that you died the last of my three brothers, and the one that I had the strongest bond with....I think back about when we were kids living on Petticoat Lane in the old farm house.... we shared secrets,when one of us hurt we both did...you had asthma so bad I remember hearing you at night struggling to breath when you got a cold....we walked to school kids now a days dont know what it is like. You were really a fast runner, like the wind even with asthma...we had pets come and pass that was heartbreaking...then we had to go to new schools from one with fourteen students in all to where there were almost thirty in one room...we both found that hard to adjust to..we were private people ...we keep things inside, put our walls up our way of coping...that we carried into adulthood..we lost our mom she died young the older siblings had her longer than we did...it didn't seem fair but that is life it isnt always fair...she taught us well about how to treat others even when we didn't think we were listening but we were it come out threw our lives...sometimes we didn't always make the right choices but lived with them same as she did...remember when she took a heart attack and was in hospital for months I hadn't started school yet..you were in grade one...we never thought we would see her again but we did her hair had changed color and she looked so different but her voice that was familiar..think about it she gave birth to seven of us...and the older ones were always so bossy...we learned to tune then out..life happened we ended up in different places but the bond we had stayed strong..you and Trudy came up north for a surprise visit you and I picked up where we left off from before...what a good feeling...In time I moved back was divorced and married Norm and we would come to visit and again the bond...you and Norm became good friends and I remember us talking about our older siblings and laugh of things gone by your laugh was infectious, everyone one recognized it wherever you went...I can close my eyes and think and hear it in my mind...you worked at different jobs but one wasn't working on fishing boats like Allen and Chris...you went once and fell over board and couldn't swim that was it no more...you workers at Cuddy,s for twenty years...and your hands were so sore most of your life eczema...it seemed so unfair..in 2008 we lost out big brothers first Chris and then Allen four months later..you and Allen lived together over thirty years and that was hard on you...Chris was sick for three years and I seen him almost everyday in those last three years....then 2009 Norm passed and you came to his funeral it was nice because you two connected...then the time came and I brought someone to meet you in Strathroy just the three of us had such a nice visit...in time I moved away again...remarried a good and caring man...then you got sick and you lost Trudy another hard time...then I called you everyday just to check in and we talked about alot of nothing but always we both said I love you when we going to hang up...then the nursing home that was hard but you quietly went along with it you told me you had no choice , I would call and leave messages that I was thinking about you and I loved you..Bill and I came to visit and met some friends you made, and you and Bill visited and liked one another and respected one another...you moved to a few different rooms...I didnt see you as much as I would like but did the best I could...this past year and even before was hard you weren't well for a long time,I called the hospital and the nurses were kind and told me how you were and I always left the same message I'm thinking about you and I love you..even when you were back at home still made the calls and left the same message...the Thursday before I called thats when I found out that you had covid and struggled for every breath you took...the nurses were kind and caring and a video that showed how hard you fought to live until your body could fight no more...I think about you and I will forever love you my dear brother....when you died it was like when mom did a part of me died to but a part of you will forever be in my heart..so on behalf of myself and my husband Bill,and my son Bill&Shaynne &family, and my son Bob&Amanda&family.
I love you my dear brother you lived you loved and you mattered...
Comment Share
Share via:
LZ

Posted Jan 27, 2021 at 08:44pm
Jack was a stepfather to me and my younger sisters. He likely wouldn’t have defined himself that way because he only tried to be a quiet, supportive person. His laugh was contagious and he became known as “cackling Jack”. He was a simple guy who didn’t need much to keep him content. Gardens, tv, movies, beer and food. He was amazing at tuning out the drama of this loud girl gang. His presence behind the scenes will be sorely missed. Lots of love as you carry forward the messages to Mom and Uncle Al from the wild girl gang.
Comment Share
Share via:
BM

Posted Jan 22, 2021 at 01:10pm
Sorry to hear about Jack. Will always remember the different times he boarded with Bob and I.
Barb McDonald
Comment Share
Share via:
JA 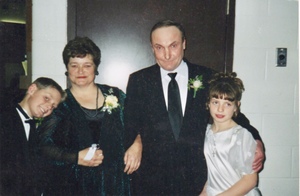