To share your memory on the wall of Arthur Sloan, sign in using one of the following options:

Print
Arthur Sloan of London died peacefully on Sunday, January 10, 2021, at London HealthScience Centre, University Hospital in London, at the age of 87

Arthur was the husband of the late Judy Sloan nee Hodgins (2013), and is survived by his ... Read More
Arthur Sloan of London died peacefully on Sunday, January 10, 2021, at London HealthScience Centre, University Hospital in London, at the age of 87

Arthur was the husband of the late Judy Sloan nee Hodgins (2013), and is survived by his sons, Chris, Ian and Kenneth Sloan, and his grandchildren all in Scotland

Arthur will be missed by his mother-in-law Marion Hodgins of Parkhill and his in-laws Joyce (Jim) Duncan of Sault Ste. Marie, and Jim (Cathy) Hodgins of Strathroy. Arthur also leaves behind his nieces and nephews, Pam and Robert Rivera of Sault Ste. Marie, Chris & Renee Duncan of Brantford, Andrea Hodgins of Ailsa Craig, Rebecca Hodgins-Tachauer (John Tachauer) of Stratford, and Miranda (Jeremy) Nead of St. Thomas. Arthur is predeceased by his sister and parents all of Scotland.

An engineer by trade, after his retirement, Arthur was a Mason and enjoyed a variety of hobbies, including, photography, Scottish Country Dancing, and hiking.

Arthurs family would like to thank the staff at Amica Mature Lifestyles for their care. In lieu of flowers, donations are appreciated to a charity of your choice.

We encourage you to share your most beloved memories of Arthur here, so that the family and other loved ones can always see it. You can upload cherished photographs, or share your favorite stories, and can even comment on those shared by others.

Posted Jan 19, 2021 at 06:32pm
We were saddened to hear of Arthur's passing. We have many fond memories of happy times with Judy and Arthur, during their annual visits to our Chesley Lake cottage. Visits usually involved touring the area, taking in the Owen Sound Dog Show in Harrison Park, walks along the lake and spending time relaxing on the deck or dock to watch the beautiful sunsets. And, of course, eating meals at precise times, as was Arthur's routine. We will miss him!
Our condolences to Marion and family and to Arthur's family, both in Canada and in Scotland.
May he rest in peace.
With Sympathy, Vera (Thompson) and Ron Davison
Comment Share
Share via:
JS

Posted Jan 17, 2021 at 01:55pm
We were so sorry to learn of Arthur's passing. He was a staunch supporter of the Scottish Country Dance London Branch and brought his own sense of humour to our gatherings. No doubt he is snapping photos somewhere in heaven right now!
John D. and Catherine Shaw
Comment Share
Share via:
JH

Posted Jan 15, 2021 at 04:05pm
My sympathy to you Marion and family and to Arthur’s family.Memories help to heal the passing of a loved one! God Bless.
Comment Share
Share via: 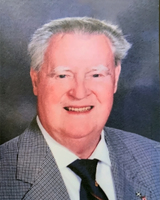